The Spring Coach’s meeting was held virtually on Zoom on June 10.  See the meeting minutes here!

It’s a whole different world, participating in speech events virtually!  To prepare for the experience, download the new Virtual Speech Manual!  This manual provides helpful information for both participants and judges.  https://secureservercdn.net/198.71.233.33/og0.b6a.myftpupload.com/wp-content/uploads/2020/10/VIRTUAL-SPEECH-MANUAL-2020-Oct-2020.pdf

The Fall Coach’s meeting was held virtually on Zoom on August 25.  See the meeting minutes here!

The 2020 Fall Coach’s meeting was held on June 23, (virtually, via Zoom).  See the meeting minutes here!

The next BCFL Coach meeting will be on June 23rd at 6 PM. This will be in a virtual setting as we cannot yet expect to be able to meet in person. An agenda will be sent before the meeting, but here is a list of agenda items:

If your school has Public Forum debaters, you may have heard that the NCFL will be changing the lengths of the summary speeches and prep time to 3 minutes. Currently these are all 2 minutes.

Since the NCFL rules change for PF does not take effect until May, we have decided that the BCFL will implement the rules change as of January 1, 2020 to give our teams a chance to compete with the new format.  Until then, we will continue to use 2 minute final focus and summary and 2 minutes prep time.

In Memory of Trish Ostermann 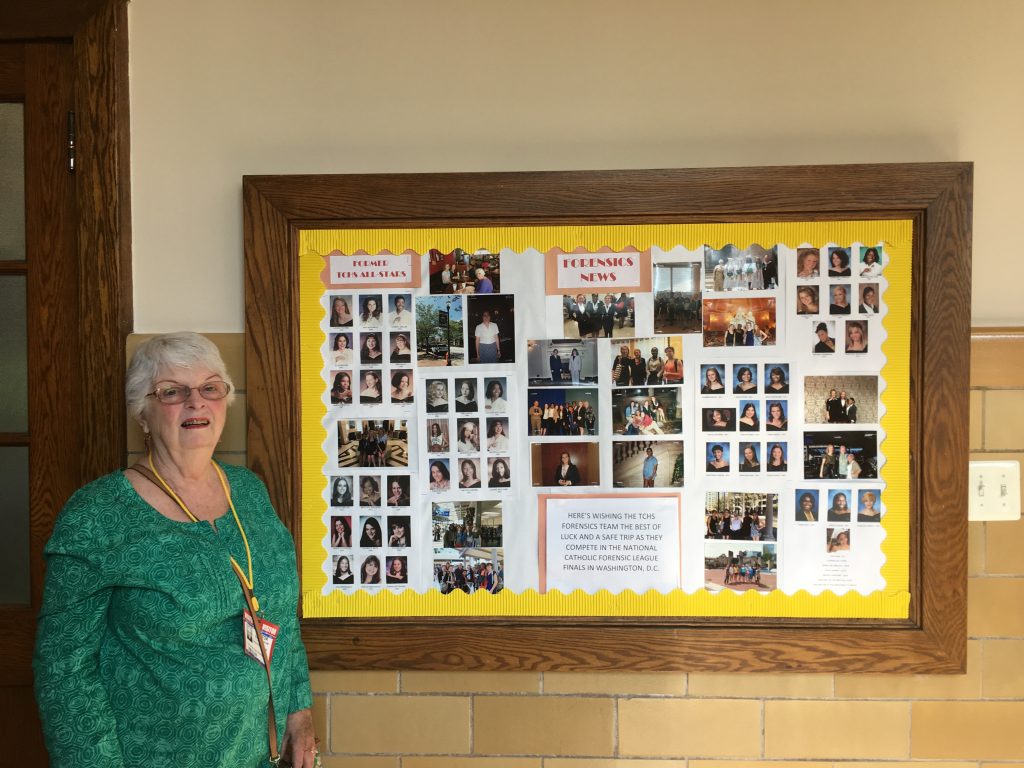 The BCFL was sad to lose one of its founding members this year.  We wanted to share some memories of Trish Ostermann from those who knew her well.

When I first met her, I knew Trish Ostermann as Mrs. Ostermann. She was an English teacher at Towson Catholic High School as well as Speech and Debate coach. She was also co-director of what was then called the Baltimore Forensics League (BFL). Most who know her in speech and debate think she  was the queen of oratory and extemp, but she also had some really competitive policy debate teams. As her role of co-director, she helped run the local tournaments, which ran on time, because of Mrs. Ostermann. I know, I did policy debate starting in 1974, and her teams were really tough. Her goal was to make all debaters better. She did. Later, when I did extemp in 1977, she judged me often, and her comments were always constructive but developmental. Sometimes, her comments were highly critical, but always with the intent of making me better. She did.She not only helped start the BFL, which later became what is now the BCFL, she also helped start the Mid-Atlantic District of the NFL, allowing students to attend two national tournaments. Her efforts were to help students expand their talents. She did.When I became a coach in 1985, she became a mentor. She provided laughter and guidance. She allowed our league to expand and change rules, as long as these rules helped kids. She often offered to judge finals in any event we needed her. She did. When we hosted Nationals in 1986, 1997, and 2012, we could always count on Trish to be there to help, work, sort, judge, and make us laugh when things were stressful. Her goal was to help us be the best league we could be.  She did. Wherever we have tournaments, whenever we are looking for that missing judge or student, and whenever we gather to celebrate students’ success in speech and debate, we can do this because of Mrs. Patricia (Trish) Ostermann, because of what she did. Thanks, Trish.

What can I say about Trish Ostermann?  It would be hard to encapsulate her influence in a book, much less a paragraph!  She was an educator, mentor, and friend without parallel.  This, however, is a Forensics site.  Without her leadership, there would have been no BCFL.  She and Frank Sharp began the BCFL and she acted as its director  at various times.  Trish Ostermann’s dedication to Forensics was remarkable.  She was involved on her Forensics Team as a student in high school herself in the 50’s and coached students at various schools including her alma mater, The Catholic High School of Baltimore, until this past Spring.  Speech had no stronger advocate in Baltimore.  Her wisdom, spirit, insightful ballots, and ready, hearty laugh will be sorely missed.  She was quite a lady!

This is a reminder that dues and the NCFL Data Form are due by November 1 (post-marked).  If your school’s processing of the these two items is not going to meet this deadline, please let me know so that your school is not charged with a 10% late fee.

Aimee Sann
Secretary/Treasurer
Posted in Uncategorized | 2 Comments
1 2 Next »
News and Information:
Message from the League Director

Welcome to the 2021-2022 tournament season!  We’re looking forward to an awesome competition season, albeit online. We plan to conduct all debate and limited prep events in real-time online, and will be conducting other speech events via asynchronous online competition (through recorded performances).    Good luck to everyone as we prepare for amazing competitions!